The effects produced by Calder can be compared directly with those of Surrealist painting. The same cannot be said of two English sculptors who represent the culmination of the modern sculptural tradition before

1945: Henry Moore (1898 — 1986) and Barbara Hepworth (1903-1975), the preeminent woman sculptor of modern times. The presence of Gabo, Kokoschka, Mondrian, Gropius, and other emigres contributed greatly to the rise of modern art in England during the mid-1930s, when Moore and Hepworth were emerging as mature artists. In consequence, they absorbed the full spectrum of earlier twentieth-century art, but in different measure, reflecting their contrasting personalities. Moore was the more boldly inventive artist, but Hepworth may well have been the better sculptor. However, the two were closely associated as leaders of the modern movement in England, and influenced one another.

The majestic Two Forms (fig. 1141), an early work by Henry Moore, may be regarded as the second-generation offspring of Brancusi's The Kiss done a quarter-century earlier (see fig. 1125), although there is no direct connection between them. Abstract and subtle in shape, they are nevertheless "persons" in much the same vein as Lipschitz's Figure (fig. 1133), even though they can be called "images" only in the metaphoric sense. This family group—the forked slab evolved from the artist's studies of the mother-and-child theme—is mysterious and remote like the monoliths of Stonehenge, which greatly impressed the sculptor. And like Stonehenge, Moore's figures are meant to be placed in a landscape, so architectural are they in character.

Through biomorphic abstraction, his Recumbent Figure (fig. 1142) retains both a classical motif—one thinks of a reclining river-god—and a primeval look. The design is in complete harmony with the natural striations of the stone, as if the forms had resulted from slow erosion over a thousand years. Moore has evoked the essence of the human figure so successfully that if we were to succumb to the natural temptation to run our hand over the sculpture, it would seem filled with inner life, so convincingly do the forms swell and undulate. Moore was originally inspired by a Mayan statue of the rain spirit Chac Mool.

Interestingly enough, the nearest relative of Brancusi's The Kiss is a Pre-Columbian pottery figurine group, which, however, the artist cannot have known, since it was a later discovery. The coincidence nevertheless serves to underscore the fundamental kinship between Brancusi and Moore. Moore's figure also suggests an awareness of Arp's Human Concretions from about the same time (see fig. 1136). The difference is that Arp suggests anatomical forms without specifically referring to them, as Moore does. The total effect is not unlike the arabesques achieved by Matisse in Reclining Nude I (fig. 1124). In addition, the liberties Moore takes with the human figure are unthinkable without Picasso (compare fig. 1065). In this way, Moore unites the strands of early modern sculpture into a seamless whole of incomparable beauty and subtlety. 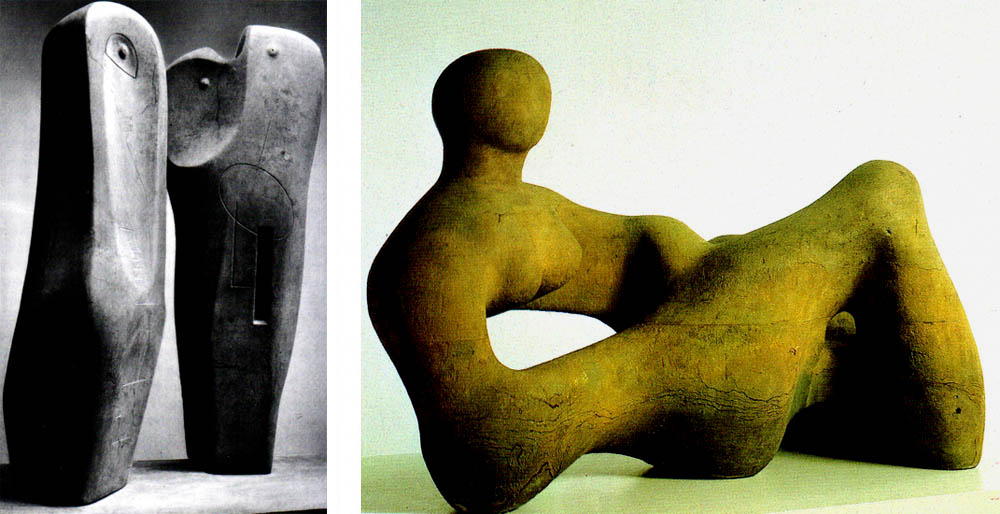 In common with Moore's, Hepworth's sculpture had a biological foundation, but her style became more abstract after her marriage to the painter Ben Nicholson, her association with the Constructivist Naum Gabo, and her contact in Paris with Brancusi and Arp. For a time she was practicing several modes at once under these influences. With the onset of World War II, she moved to St. Ives in Cornwall, where she initiated an individual style that emerged fully in 1943. Sculpture with Color (Oval Form) flawlessly synthesizes painting and sculpture, Surrealist biomorphism and organic abstraction, and the molding of space and shaping of mass (fig. 1143). Carved from wood and immaculately finished, it reduces the natural shape of an egg to a timeless ideal that has the lucid perfection of a classical head, yet the elemental expressiveness of a primitive mask. Hepworth's egg undoubtedly owes something to Brancusi's (see fig. 1126), although their work is very different. The colors accentuate the play between the interior and exterior of the hollowed-out form, while the strings, a device first used by Moore, seem to suggest a life force within. As a result of its open forms, Sculpture with Color enters into an active relationship with its surroundings. Like Moore, Hepworth was concerned with the relationship of the human figure in a landscape, but in an unusually personal way.

After moving to a house overlooking St. Ives Bay, she wrote, "I was the figure in the landscape and every sculpture contained to a greater or lesser degree the ever-changing forms and contours embodying my own response to a given position in that landscape. I used colour and strings in many of the carvings of this time. The colour in the concavities plunged me into the depth of water, caves, or shadows deeper than the carved concavities themselves. The strings were the tension I felt between myself and the sea, the wind or the hills." 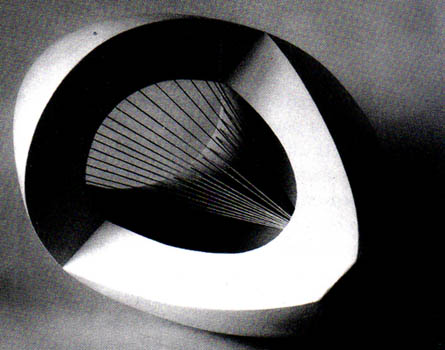 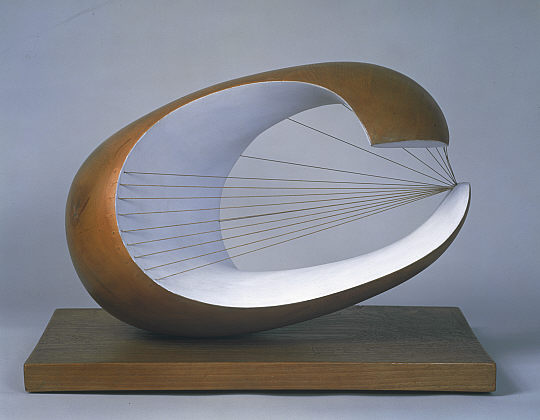 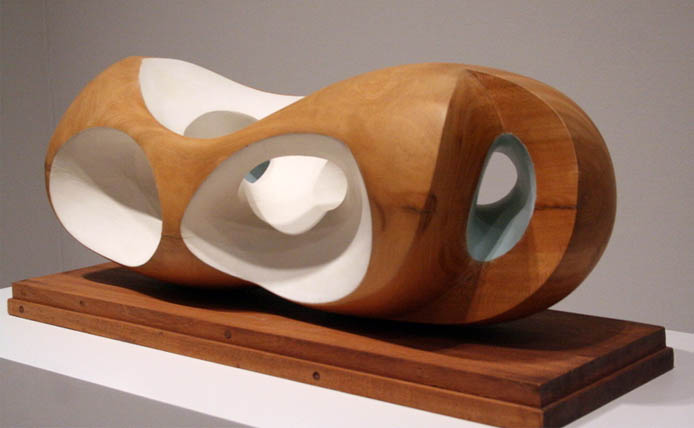 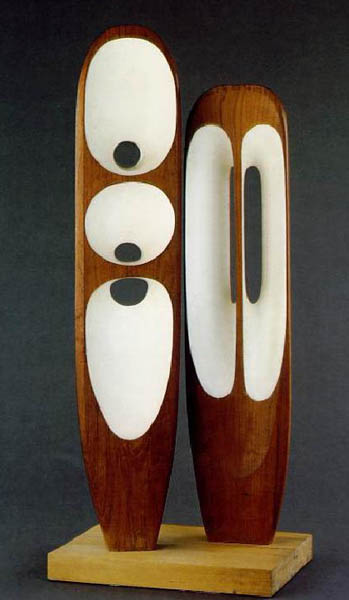 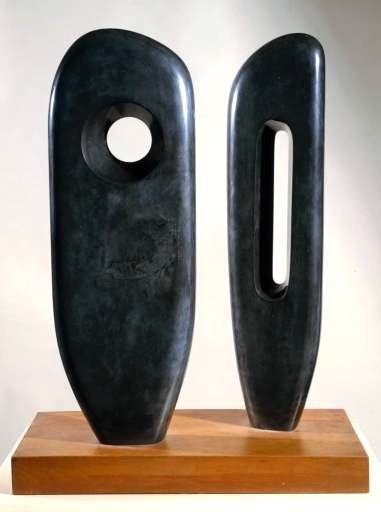 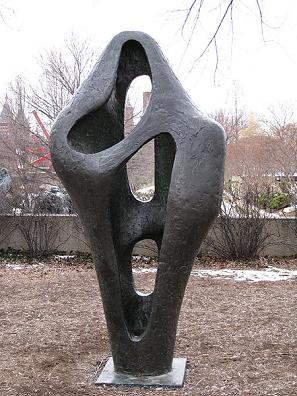 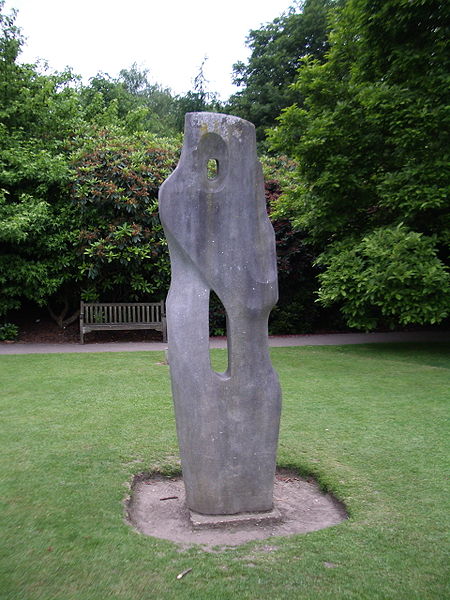 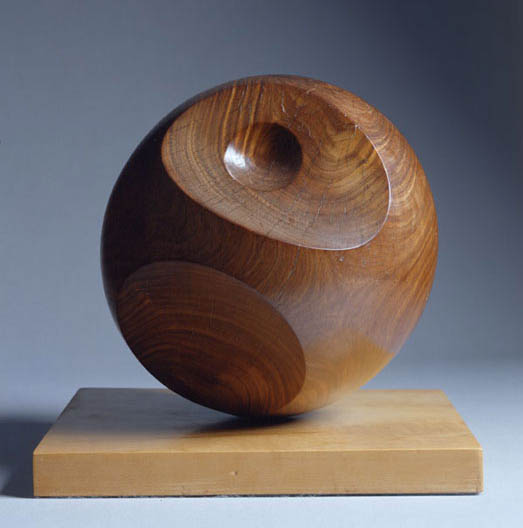 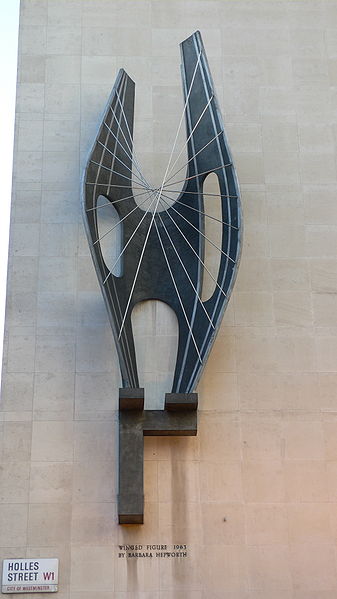 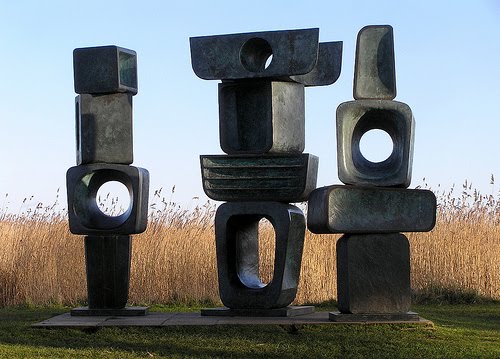 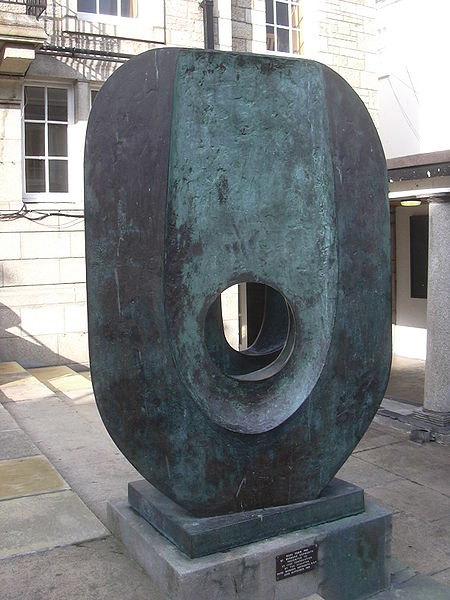 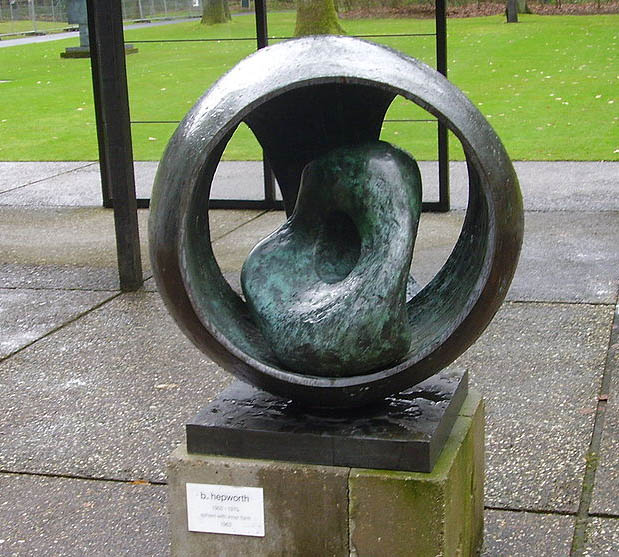 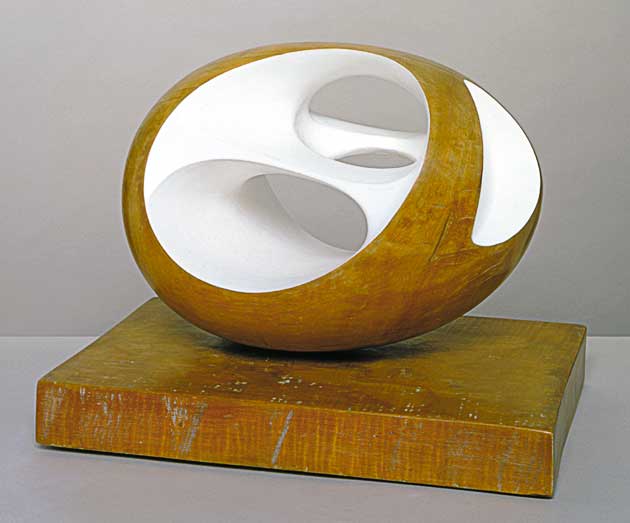 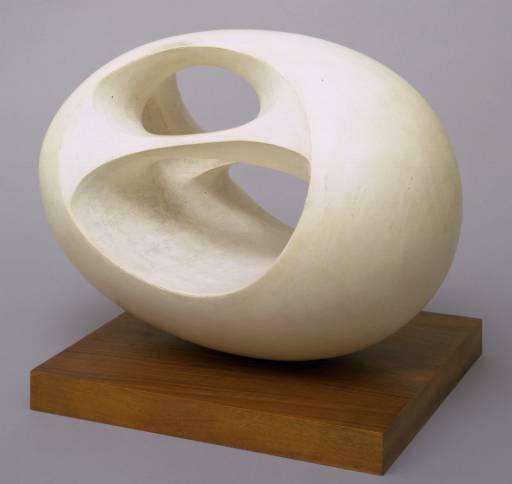 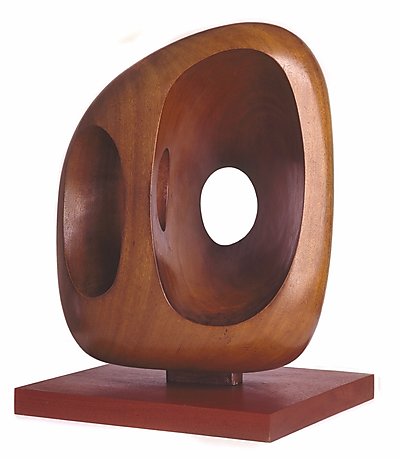 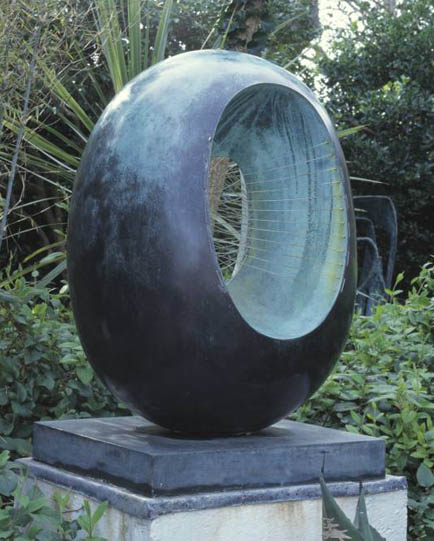