1959 Cadillac, the queen of all tail-fin street cruisers, marks the notable high point of an era of opulent, neo-baroque fiction. The glittering, gross trim of the technical appliance had outlived itself; reality caught up with the designer dream. The gruffly charming Lockheed "Constellation" propeller plane, with its three round horizontal tail units, was now succeeded by the sleek, jet-propelled Boeing 707 as the embodiment of modern mobility. The new ideal form was streamlined and functional.

In architecture, dynamic, upswinging roofs in every imaginable curving form expressed culturally optimistic statements in coolly objective shapes. The necessary technology had already been developed by Dischinger, Finsterwalder and Bauersfeld in the thirties, although initially employed almost exclusively for single-arched shells, and in particular barrel vaulting. Statics were further improved by more complex forms, such as the double-arched saddle. There is an undoubted expressiveness about such structures, and it is surely no coincidence that the achievements of civil engineering in this field were taken up in the fifties. In his General Motors Technical Center, Eero Saarinen had already placed the auditorium of the Design Department under a flat, silver calotte shell. He continued this line in his design for the Massachusetts Institute of Technology auditorium with a cupola roof resting on only three points. The results were not, however, entirely satisfying. It lacked an obvious front, and above all it lacked dynamism. Therefore a completely different approach was adopted for the Yale University Ice Hockey Stadium, which he built just a short time later. From a standing central arch spanning the entire length of the building, the roof panes swing out to lateral concrete frames of identical radii. Saarinen thought this hanging roof still looked too apathetic from the outside,- it reminded him of a turtle. He therefore extended the ends of the arch beyond their bases and curved them skywards. The long, craning tip above the entrance ends in a lamp sculpture by Oliver Andrews, whereby this visual manipulation re-acquired functional justification. The comment of one hockey player

- that the stadium vault shouted "Go, go, go" at him as he chased the puck - confirmed precisely the impression of dynamism intended by this architecture. Unlike the M. I. T., however, this sculptural building is not prominently placed on an empty plot of and, but stands in a crowded urban environment to which its form bears no real relation.

Function and experimental form also found outstanding fusion in a new terminal for Trans World Airlines in New York. On the one hand, the very concept of a

passenger terminal for air travellers invited a futuristic approach; on the other hand, competition between private airlines made a striking architectural statement particularly desirable. Above a curving low building facing the approach ramp rises the daring roof of the passenger area. It is in principle composed of four arched shells of spectacular cut. They each stand on two feet, their tips meeting above the centre of the hall. Narrow overhead windows along this interface emphasize the autonomy of the different segments. The thickened shell rims, echoing the lines of force in reinforced concrete, add to the organic character of the building. An overall image of a bird with spreading wings is confirmed in the beak-like projection of the roof. The interior is characterized by powerful curves which carry the dramatic style of the roof into even the smallest details.

A not insignificant problem accompanying large ferroconcrete shells, are the large wooden frames required for their casting, which can account for more than half of total construction costs. It was for this reason that Pier Luigi Nervi

worked largely with prefabricated parts in the Palazzetto dello Sport, his "small" stadium for the Olympics in Rome. Its shallow calotte shell is composed of 1620 polygonal prefabricated parts which form a textured diamond pattern on the inside, created by the webs in which the connecting steel reinforcements were laid. Their progression was organic in effect, but did not describe the actual lines of force. The development of the rim zones was thereby of particular note. Since unequal load could cause substantial static problems in these areas, Nervi found a new solution: triangular concrete elements transfer the load to sloping piers, angled in the exact direction of vault pressure. The concrete surface of the roof is continued between these piers and ends in an undulating border. The roof skin is thus drawn optically lower than the load-bearing shell actually extends.

Dulles International Airport in Washington D.C. was also built with prefabricated parts. Saarinen here designed a huge hanging roof, held by arms which raise its broad surface to the sky like the flag bearers at the Olympic Parade of Nations. Concrete slabs were hung between the supporting steel cables and, as in Nervi's stadium, covered above with a reinforced closed concrete ceiling.

Saarinen's hanging roof in Washington and Nervi's cupola in Rome both represent very simple geometric forms. More complicated, however, are the so-called" ruled surfaces" created via the movement of a generating straight line along two directrices. At any rate the volumetric figures which result can be manufactured in a mould with straight boards. In the case of the hyperbolic paraboloid there are even two systems of generating straight lines,- the boards can thus also be joined straight, making the wooden framework simpler and cheaper to build. Such surfaces can be built both as normal shell roofs and as hanging roofs. Their transformation into an architecture which is economical as well as constructionally illuminating is not without its difficulties, however, as the story of the Benjamin Franklin Hall in Berlin reveals. Presented to the city as a gift by the USA on the occasion of the

1957 Interbau Exhibition, it was to offer a visual illustration of its function as a congress hall, a forum for free speech. Architect Hugh Stubbins planned a hanging roof which was held by two arched supports on each side and which, spectacularly, rested on only two points. It only actually roofed the central auditorium,- the large complex was otherwise covered with a flat, quadratic cement slab. Since a roof which rests on only two points is statically almost impossible, a solution was adopted which provoked much criticism at the time: the walls of the auditorium assumed the load of the roof section suspended between them, while the clearly-visible wings only supported the oversailing "hat brim", creating a contradiction between the seeming and the actual load distribution.

1980 the front wing collapsed, following the corrosion of its steel members. In its reconstruction over the next few years it proved possible to execute the original plan, and to indeed base a wide-span roof on only two points. The roof is now raised fully clear of the separate auditorium roof below. Its dimensions are slightly modified as a result of its new structural calculation bases. From an aesthetic point of view, however, the building can still be criticized. In the mad ride of its architecture, the communicative element is left far behind. The interior is both unclear and awkward; the foyer is disfigured by the strange pot-belly of the auditorium above. The - in places very low - ceilings produce a cramped atmosphere, and the lecture hall itself is too much oriented towards purely one-sided communication. Possibilities for meaningful long-term usage are limited by the lack of flexibility of the rooms. This huge architectural gesture today represents little more than a memorial to a past epoch, and the hall was perhaps rebuilt for that very reason.

There is, however, an alternate tradition of reinforced concrete dating back to Berg's Century Flail (see fig. 1177). This Expressionist vision continued to provide a dialogue with the International Style that enriched modern architecture. The Trans World Airlines Terminal at Kennedy Airport in New York (figs. 1202 and 1203) by Eero Saarinen (1910-1961) is the great statement of postwar Expressionism. Saarinen, whose father had been a well-known architect in his own right, was a skilled practitioner of the International Style. Here he has used the full potential of concrete in order to express the very essence of flight. Yet the inspiration, rather than mechanical, was purely organic. The swelling, saillike forms of the lour "flying" roofs create the impression of a gigantic bird, while the free-flowing spaces conduct the visitor through the graceful interior with astonishing force, as if pulled along by a vortex. 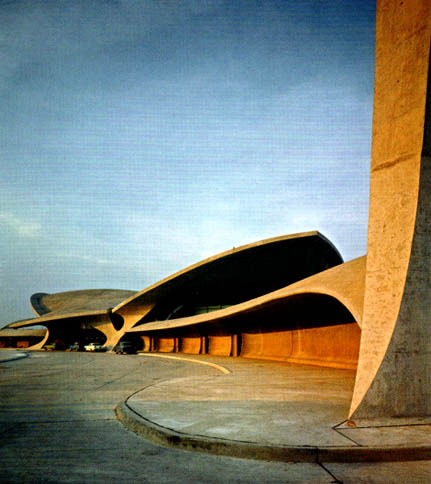 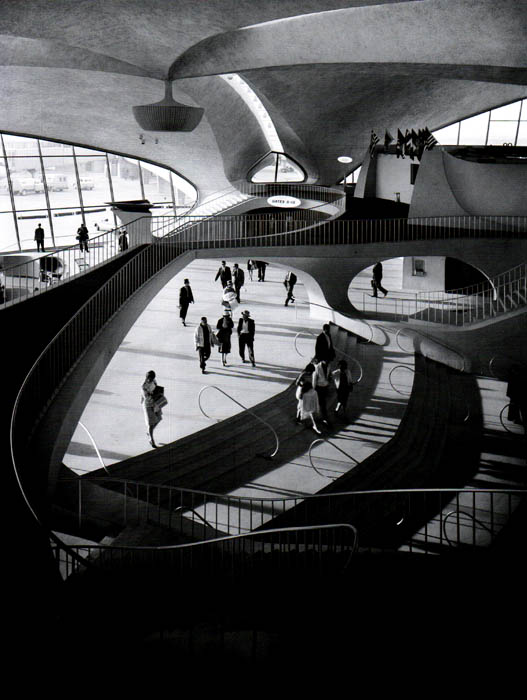 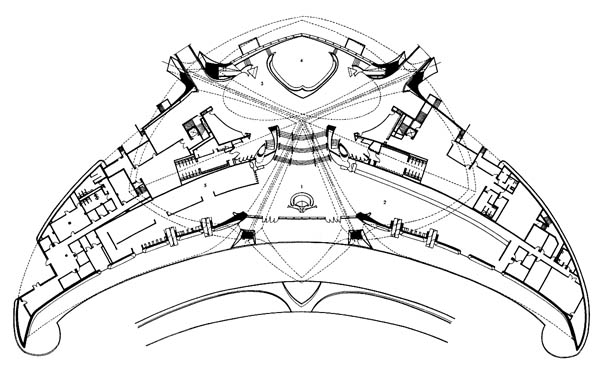 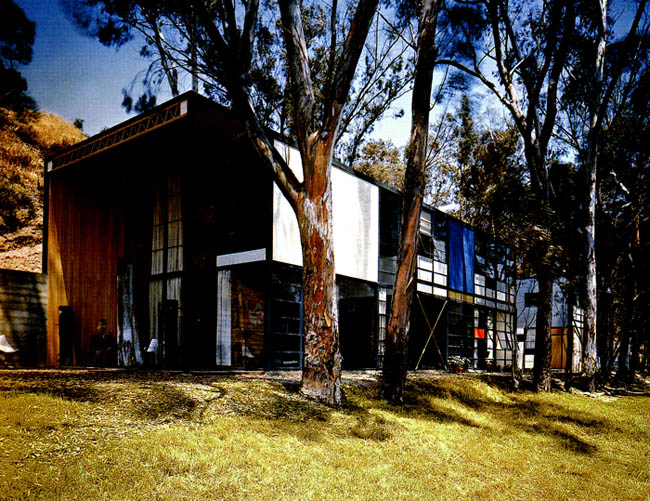 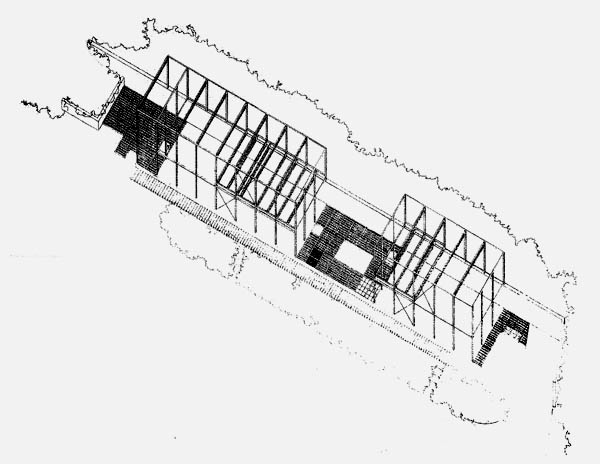 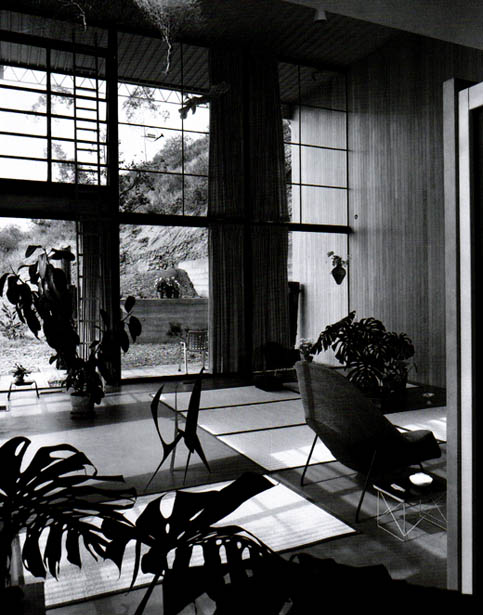 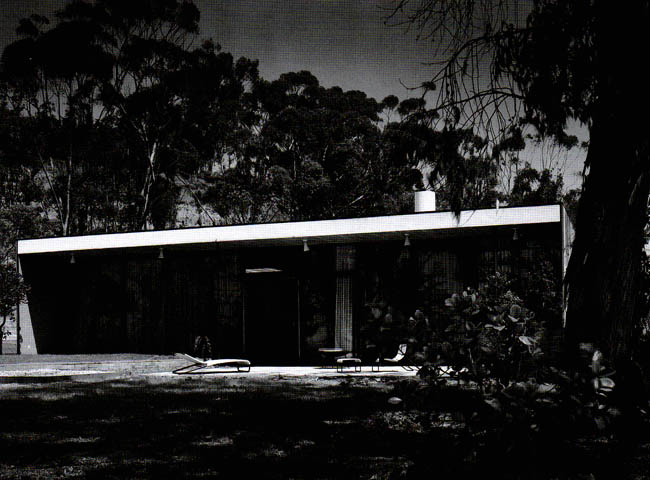 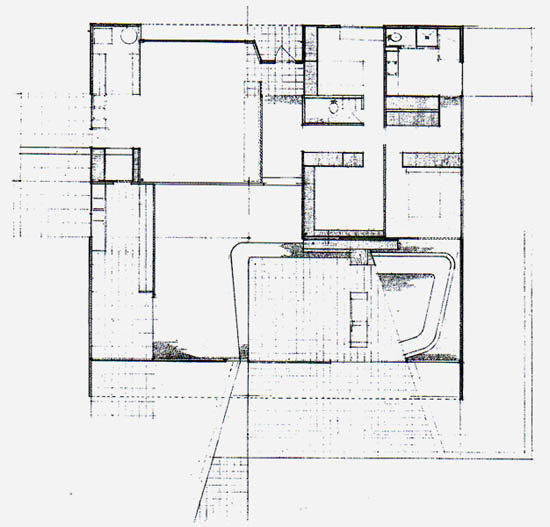 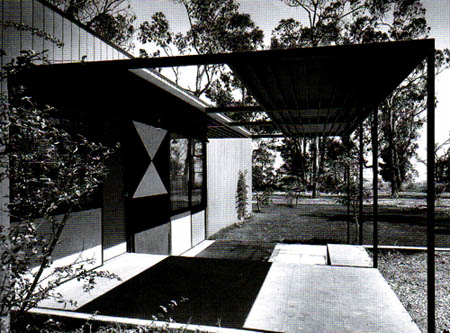 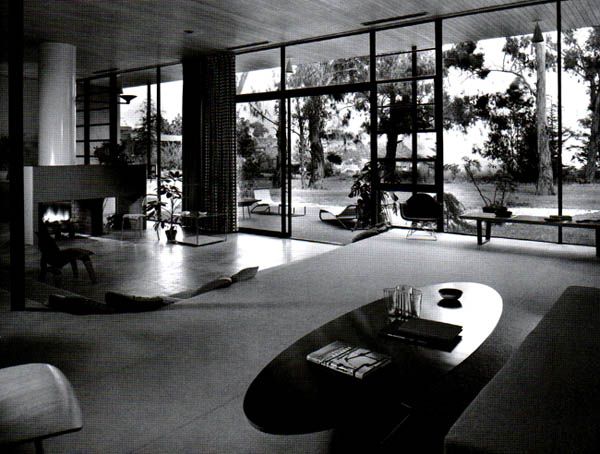 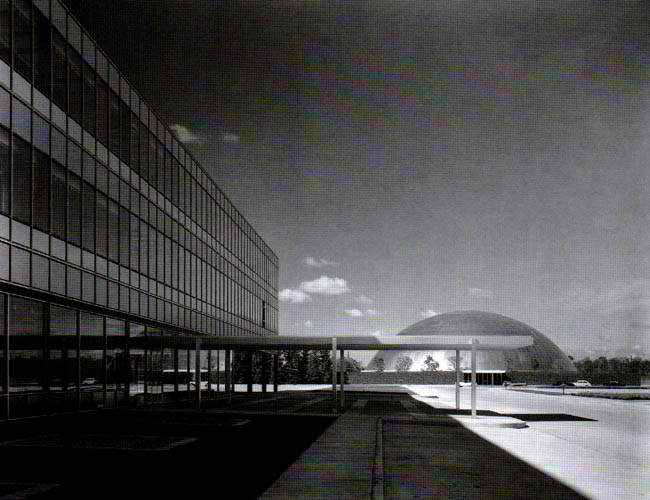 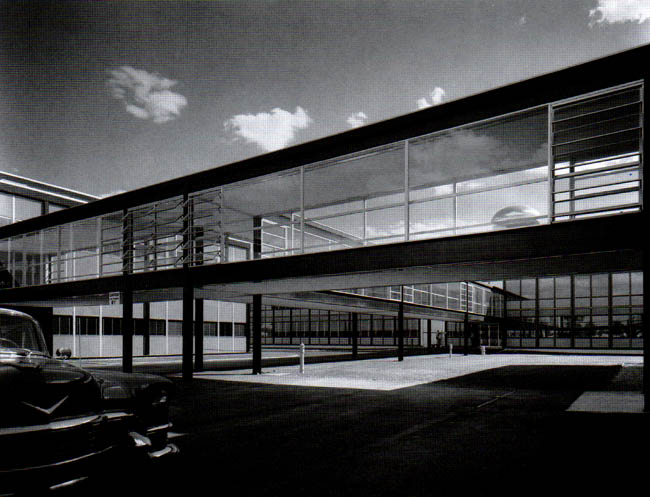 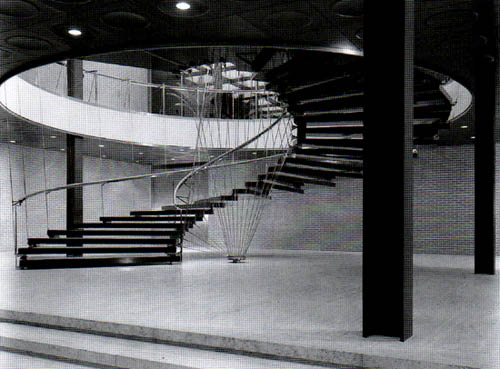 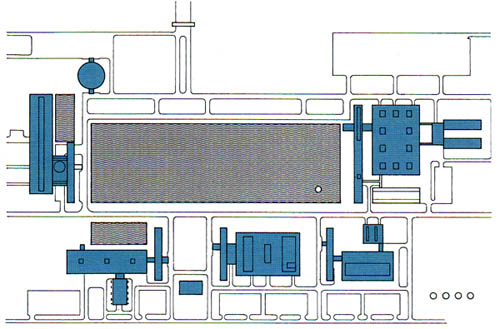 General plan of the complex 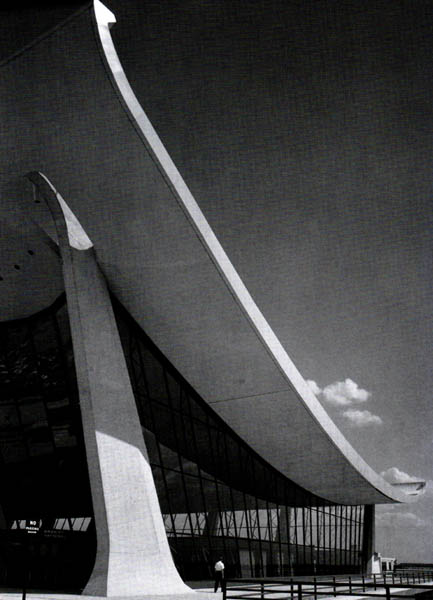 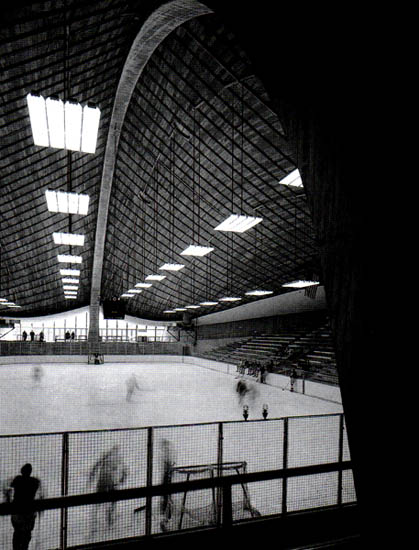 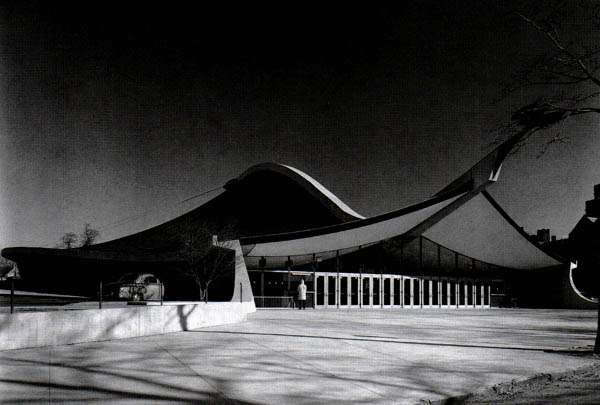 Longitudinal section of the stadium